The de Havilland Vampire is a British jet fighter which was developed and manufactured by the de Havilland Aircraft Company. It was the second jet fighter to be operated by the RAF, after the Gloster Meteor, and the first to be powered by a single jet engine.

Development of the Vampire as an experimental aircraft began in 1941 during the Second World War, to exploit the groundbreaking innovation of jet propulsion. From the company’s design studies, it was decided to use a single-engine, twin-boom aircraft, powered by the Halford H.1 turbojet (later produced as the «Goblin»). Aside from its propulsion system and twin-boom configuration, it was a relatively conventional aircraft. In May 1944 it was decided to mass-produce the aircraft as an interceptor for the Royal Air Force (RAF). In 1946 the Vampire entered operational service with the RAF, only months after the war had ended. 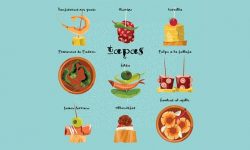 English In this course, you will learn how to prepare 4 delicious Spanish tapas: Spanish tortilla, Russian salad, cojonudo, and shrimp scampi. You ...
1.5 total hours
Previsualizar este curso
Add to Wishlist
$34.99 $19